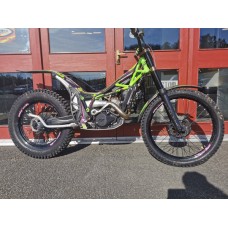 Designed, built and distributed by multi FIM World Champion Dougie Lampkin, the Combat has been ridden to victory by Lampkin at the Scottish Six Day Trial on no less than four occasions.

The Combat Vertical has a 300cc two stroke engine with two mode settings.

This one has had a recent top end rebuild by Ryan Farquhar engineering.

This bike has been maintained regardless of cost using the correct oils at the correct service intervals.

Although it has only been used for fun by two previous mature owners, make no mistake, this is a seriously competitive Trials bike with championship winning pedigree.